A Champagne Cruise to Remember in London – Tickets now on sale! 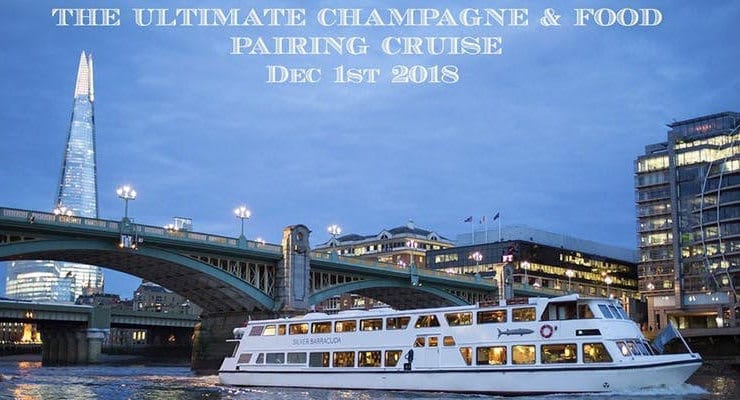 A unique and very exclusive Champagne and food pairing evening is soon to happen via Serge Ngoie and Richard Juhlin on December 1st – The location is a superb boat ride on The River Thames on board the Silver Barracuda.

To celebrate 2018 as an exceptional Vintage year in Champagne, Serge Ngoie have teamed up with the Champagne Champion himself – Richard Juhlin, together with head sommelier Björnstierne Antonson to bring to you the ‘Exclusive Prestige Champagnes and Food Pairing Cruise’ event on the River Thames, in London, UK.

This rare VIP event will take place on-board a unique Art Deco boat with a Gatsby-themed interior during a 5-hour cruise trip during which guests will be treated to a Champagne reception, a gastronomic 6-course meal with paired Prestige Champagnes and a Champagne disco session with a live DJ and more bubbles from the bar. Tickets can be purchased here: PLEASE NOTE THAT THIS EVENT IS NOW CLOSED

The event will be co-hosted by Richard Juhlin, the Nr 1 Champagne expert, who will be talking about the concept behind his latest book ‘Champagne Hiking’ and will be signing give-away copies on-board.

Guests will also be entitled to take home a set of 6 ‘Optimum’ Italesse Champagne glasses (designed by Richard Juhlin), as a parting gift.

Please book early to avoid any disappointment, as availability is strictly limited!

Who is Richard Juhlin?

A couple of years ago, I asked myself the very same question. It was my birthday and my wife offered this book (or let’s say a Champagne Bible) by Richard Juhlin called ‘A Scent of Champagne’.
A classic Champagne reference book with 8,000+ Champagnes he tasted, scored and ranked in different categories. I was ecstatic and thrown back at the same time because I had never heard of this guy despite the fact I have been drinking Champagnes for the past 30 years.

With a fascinating photographic memory, Richard Juhlin possesses a unique ability to remember every Champagne he has ever tasted, this now being over 10,000! (He also remembers how every kiss tasted from his past girlfriends)

At the annual ‘Spectacle du Monde’ in Paris in 2003, Richard was attending a Champagne tasting, the tasting panel was blindly evaluating 50 Champagnes with the aim to pinpoint the brand, the producer, the grapes and the year of making. The tasting was very professional and the panel, consisting of highly qualified international sommeliers and wine experts, enjoyed ample time to evaluate each and every Champagne. Swedish-born Richard Juhlin shocked the entire world when he activated his photographic sense of fragrance and accurately stated the brand, the producer, the type of grapes and the year of 43 out of the 50 Champagnes!
The runner-up, a French former sommelier world champion, managed to correctly identify only 4 Champagnes…

A true Champagne legend was born!

A few years later another tasting consisting of 20 vintage rose Champagnes was organised, this time Richard successfully identified all 20.

To make a long story short, we’ve recently contacted Richard to ask whether he wouldn’t mind being the guest of honour for our upcoming Gastronomic Champagne & Food Pairing Cruise event on the River Thames and he kindly accepted. Hence why we are reaching out to you today to officially introduce the World’s Number One Champagne expert and independent critic to the UK media and public. Perhaps this could be a great opportunity to organise an interview with Richard?

Mr Juhlin has written 4 award-winning books about Champagnes and with his most recent one, he has invented the concept of Champagne Hiking; why Champagnes taste better at a specific time, in a specific place. The Champagne Hiking concept is also illustrated further by Richard’s tasting of the 100 Best Champagnes at the top 100 Locations in the World. He also talks about how surroundings play a big part when tasting a wine. One can certainly relate to how the rosé wine drunk on holiday in Spain tastes nothing like it back at home in the UK.

We feel very privileged to have Richard Juhlin on-board our new and unique event in London later this year. A 5-hour long Gatsby-inspired Champagne cruise along the Thames. Richard will not be alone as our special guest, he will also be accompanied by his very talented award-winning head sommelier Björnstierne Antonson who will be designing the gastronomic menu to be paired with each exclusive prestige Champagne cuvée for our guests. The aim of this event is to put Champagnes back in the UK limelight by creating an exclusive tasting under a concept that brings the consumers in front of the producers in a friendly, personal and iconic environment.
A perfect place to compliment and extrapolate Juhlin’s ‘Champagne Hiking’ project! In previous Swedish TV appearances, Richard talked about how he had once lost his sense of smell due to a cold, which he compared to the feeling of watching everything in black & white and how he suffers through flights where he is forced to sit close to people with low hygienic standards. In restaurants he firstly locates the toilets before choosing his table. He also talks about how important it is for a couple that one partner’s scent matches the other’s, and how that plays a big part in a successful relationship.

Richard Juhlin also talks about the buried treasure in the Baltic sea where the 168 oldest Champagne bottles that were found by a Finish diver in a shipwreck. As the world’s foremost Champagne expert, he was assigned to the rescue project. He claims the Baltic Sea floor proved an ideal wine cellar, with the right temperatures, total darkness and enough pressure to keep the corks in. A bottle of Veuve Clicquot, nearly 200 years old, was part of the booty from the shipwreck dating to between 1825 and 1830 which was discovered in July 2010 on the sea floor near Finland’s autonomous Aaland archipelago, it later fetched 30,000 Euros in an auction.

He is also currently working on a television series with 13 episodes about ‘Drinks and Restaurants in Europe for American and Chinese television. In 1999 he did a film called ‘Treasures of Champagne’ for Swedish Television which sold to 14 different countries.